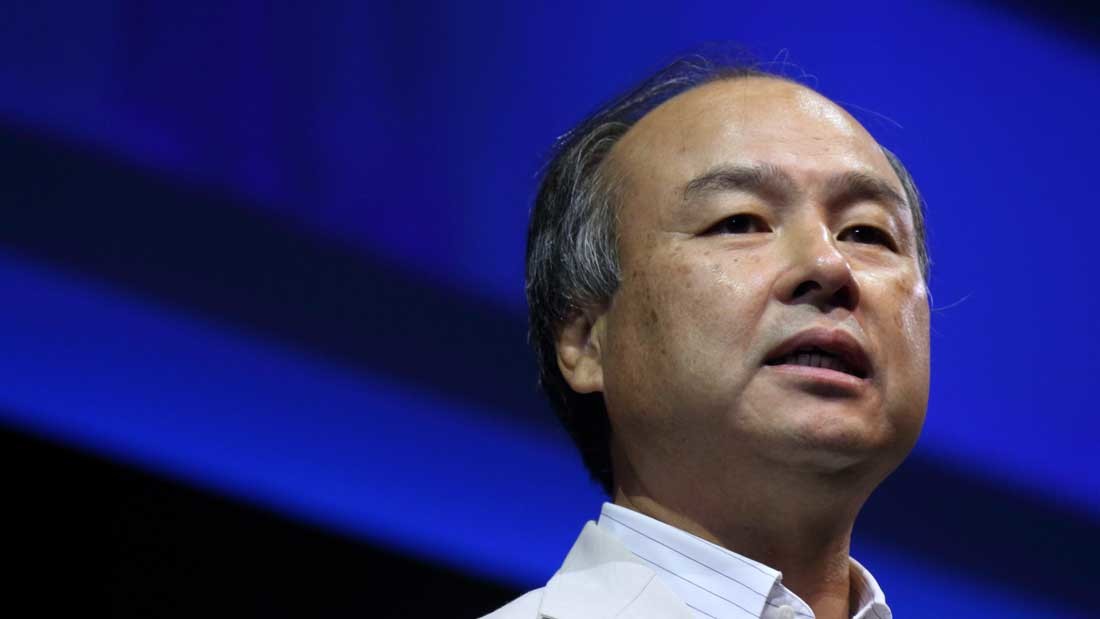 I am about to go out on very thin ice. I am a value investor, but I’ll probably get banned from the value community for what I am about to say: Current valuations don’t mean much for companies in industries that are entering an exponential growth phase. As I type this, I catch myself thinking that it sounds so “dot-commish,” but bear with me as I try to bring my statement into a more familiar value framework.

Wall Street hates SoftBank’s recent decision to purchase ARM Holdings for £24.3 billion ($32 billion) — at a whopping 48 times earnings! SoftBank is paying a 43 percent premium for an already richly priced stock, and it doesn’t have any synergies with the U.K.-based supplier of semiconductor intellectual property — there are no costs to cut or additional revenue to capture by adding ARM to its existing businesses. Masayoshi Son, SoftBank’s founder and CEO and the reason my firm owns SoftBank stock, is not liked today as a result of the deal. I heard this (understandable) reaction from a friend about Son and the ARM purchase: “a bored rich man who needs to spend because he has too much.”

To understand this acquisition, we need to come to terms with Son’s investment strategy and his mental models that have made him the richest person in Japan. Son is a master of exponential (nonlinear) thinking. Examine his past investments and you’ll find that he identifies industries about to go from high but linear growth into the exponential phase — where the rate of growth is accelerating.

Son has done this over and over again during the past 40 years. It started with PCs in the ’70s, when he built a software distribution business in Japan to capitalize on PC growth entering the accelerating phase. He saw the inflection point of Internet growth in the ’90s, bet on Yahoo and created Yahoo Japan (a joint venture with Yahoo).

In the early 2000s he saw e-commerce and the Internet taking off in China and purchased a stake in Alibaba, turning his $20 million investment into $60 billion today.

Son had the insight that the wireless market, which was already growing nicely, was about to explode due to the popularity of smartphones. True story: He went to Steve Jobs with a drawing of an iPod with a superimposed dialing pad and asked him to make a smartphone. This was before Apple even announced plans for the iPhone.

More important, to capitalize on this realization he bought the worst-run wireless mobile carrier in Japan (a very unpopular move at the time) and transformed it into the best one — a huge source of SoftBank’s cash flow today.

In 2013, Son thought the growth rate of mobile games — which, again, were growing nicely — would accelerate as processing power and video capabilities got better and smartphone adoption increased. To take advantage of this impending trend, SoftBank paid $1.53 billion that year for 51 percent of Helsinki-based game maker Supercell (a $3 billion valuation). In 2015 it upped its stake to 73.2 percent before selling its entire position this year at more than three times the initial valuation.

Identifying industries that are entering an exponential growth phase is hard enough, but acting on the insight is even more challenging. I remember looking at a report on Apple in 2009, analyzing smartphones’ potential market size, assigning a conservative market share to the iPhone and basically saying that over the next several years Apple’s sales could accelerate (or continue at the then-current rate of 30 percent or so) and reach $100 billion from less than $20 billion that year. I saw the logic in the analysis, but it was difficult for me (and, I think, for most people) to mentally process a high growth rate going exponential. By the way, iPhone annual sales reached $155 billion in 2015.

Investing at the pivot point when growth rates accelerate is especially tough for value investors (present company included). As revenue growth accelerates, costs usually don’t rise as quickly, and therefore earnings increase at an even faster rate than revenue — now earnings growth is truly exponential. This dynamic creates a lot of value, which our linear brains may or may not process.

This brings me to ARM Holdings, which designs and licenses processors. Unlike a traditional semiconductor company, ARM doesn’t manufacture or even outsource the manufacturing of its processors.

Companies like Apple, Broadcom and Qualcomm have an architectural license — they license ARM’s platform and then build their processors on top of it, turning ARM’s base design into an operating system for processors. ARM’s platform allows Qualcomm processors to work in Samsung phones and be interchangeable with Samsung’s own ARM-based processor. As architectural license holders pour billions of dollars into R&D for their ARM-based processors, they increase the value of ARM’s ecosystem and thus widen ARM’s competitive advantage. Today 97 percent of mobile devices run on ARM-based processors. ARM keeps its royalty rate very low — it makes a few pennies on each processor sold.

Son admired ARM’s business from afar for ten years. He has said that if SoftBank hadn’t been burdened with the Sprint turnaround, he would have tried to buy ARM sooner. Recently, SoftBank raised $10 billion of cash by selling down its stake in Alibaba and about $8 billion by selling its ownership in Supercell to China’s Tencent. These transactions gave SoftBank dry powder to make the ARM acquisition.

Son believes we are at the inflection point when the Internet of Things (IoT) market is about to enter the exponential growth phase. There are 7 billion people in the world today. In 2015, ARM sold 15 billion processors — about 2 processors per person. By 2020, ARM expects to sell 75 billion processors a year — a fivefold increase.

But that is just the start. According to Son, in the long run we are going to need hundreds if not thousands of processors per person. Cars, streetlights, home appliances, hospital patients — everything will be connected to the Internet.

Cows will become part of IoT. They’ll have a sensor on their body telling the farmer when to milk or whether the cow is sick. A sensor with GPS will pinpoint the location of every cow in the field, viewable on an iPad. I don’t know the first thing about cows, and I came up with these ideas in two minutes. Can you imagine the real IoT applications that lie ahead, created by people who actually know about cows and farming? (I was half joking when I wrote this, but “connected cow” is in our future —check this out.)

All of those “Things” will need processors, and ARM is well positioned to be the company designing them and collecting pennies from each one.

ARM is better off being part of SoftBank than being an independent public company. The Internet of Things will require significant investment, which could penalize ARM’s short-term earnings. Son doesn’t care about short-term — remember, he has a 300-year plan for SoftBank. In fact, Son has agreed to double ARM’s workforce in the U.K. over the next five years.

Now let’s get to the price SoftBank paid for ARM. In 2016, ARM should produce revenue of $1.6 billion and earnings of $660 million. Let’s say that by 2020 the number of ARM processors sold increases fivefold but the price of each processor (and thus the royalty) declines by 50 percent. ARM’s revenue would be up by three times, to $4.8 billion. Let’s assume that, as promised, Son doubles ARM’s R&D; that gives us aftertax earnings of $2.8 billion. In other words, SoftBank is paying less than 12 times earnings for this company, which in 2020 will still just be in the early stages of explosive growth. If that scenario plays out, Son probably created at least $10 of value per SoftBank share by making the ARM acquisition.

Son has a tremendous investment track record, but he is not infallible. He bought Sprint in hopes of merging it with T-Mobile, cutting costs and doing with the combined business what he did with Vodafone Japan. Son miscalculated: U.S. regulators have blocked the merger, and T-Mobile’s CEO ended up being a marketing genius and has taken market share from Sprint.

Last year Son became Sprint’s chief network officer. His goal is to improve Sprint’s network while spending a fraction of what competitors are spending. Son has said recently that Sprint will stop bleeding cash and will turn cash flow positive this year. But he is the first one to admit that the purchase of Sprint was a mistake.

What if the purchase of ARM was a mistake? What if ARM continues to grow 15 percent a year over the next four years? Then its earnings will be $1.2 billion, and at 19 times earnings it will be worth $23 billion. Son will have overpaid by $8 billion, which will equal the 43 percent premium he paid over ARM’s last quoted price, destroying about $4 of value per SoftBank share. In our sum-of-the-parts analysis, we get a conservative value north of $40 to $50 a share for SoftBank. Therefore, even in the worst case, SoftBank at a recent price of $25 a share is undervalued.

Exponential growth is born in the eye of a perfect storm. Advances in big data, the proliferation of the cloud, miniaturization of low-powered processors (and a decline in their price), a drastic improvement in wireless Internet that will only get better with 5G, the ubiquity of smartphones and smart devices — each one of these, independently, probably would not matter that much for IoT. But together they become a significant accelerator for the entrance of IoT into the exponential growth phase.

When you buy SoftBank stock, you bet on the jockey. And this jockey’s interests are aligned with those of SoftBank’s shareholders. Masayoshi Son owns 20 percent of SoftBank shares; therefore, each acquisition he makes is paid for not with Monopoly money but with his own. Over the past 35 years, he has made many decisions that at the time were unpopular and unorthodox but that turned out to be tremendous home runs.

This time is no different. Son’s track record has bought him the benefit of the doubt on the ARM purchase. If he made a mistake, he may have destroyed $4 a share of SoftBank’s value, but at the company’s current undemanding valuation, I could even live with that outcome.

P.S. Let me address the elephant in the room — SoftBank’s debt. I keep seeing the media saying that SoftBank has $110 billion of debt. Factually, this number is accurate; in reality it overstates SoftBank’s debt by about 100 percent.

As of last quarter, when the debt figure shifted somewhat after the ARM acquisition, SoftBank did have about $110 billion of debt. However, $33 billion was Sprint’s. SoftBank owns more than 80 percent of Sprint, and so this debt consolidated on SoftBank’s balance sheet. But if Sprint were to go bankrupt, SoftBank would not be responsible for any of that $33 billion. Also, SoftBank has $21 billion in cash. Thus its net debt position is closer to $56 billion. SoftBank’s Japanese telecom business produces about $7 billion of operating income (and $11 billion of EBITDA). Though $56 billion is a lot of billions, in relation to SoftBank’s earning power it is a reasonable amount; and once you account for a variety of other SoftBank assets, that number is even less significant.